Cows of the Street

I’ve always been fascinated by cows. I suppose being fascinated by cows could be considered a negative indicator of intelligence, but I prefer to think of it as a love of nature, and a reverence for where my hamburgers come from.

As a kid, I helped my cousin in Mississippi get his show cow ready for the fair. “Helped” mainly meant “watched,” as I was a bit of a city slicker, and hadn’t beefed up (sorry!) on my cow fundamentals. But I helped clean and groom the cow, which included a thorough tail bleaching. The tail bleaching, I’ve always remembered, was to counteract the cow’s tendency to get shit all over its tail — a shitty tail, my cousin taught me, a winning fair cow does not make.

As a teenager, when I visited my brother in upstate New York, I made him stop by the side of the highway so I could burn a roll of film on some cows mulling about a field. This was another choice of subject matter, along with my “clouds of the sky” picture albums, that made my dad seriously rethink my filmic allowance.

But last week, when I was in Delhi, I had two things going for me; a 2GB memory card and cows conveniently on the street!

Street cows are not your ordinary everyday cows. They sidle up to you and talk fast; before you know it, you’re the proud owner of a “genuine” Rolex, or you pat your back jeans pocket and realize your wallet’s been pinched.

No, actually they’re exactly like country cows. The impressive thing about cows (besides their immensity and tastiness) is that they are unpreturbable to the nth degree. Cow A (pictured) chewed her cud as placidly, traffic whooshing and honking on either side of her, as if she were in a rolling meadow of flowers. She might have been be too stupid to know that she wasn’t in a meadow of flowers, or else realized that none of the small cars could really put a dent in her. 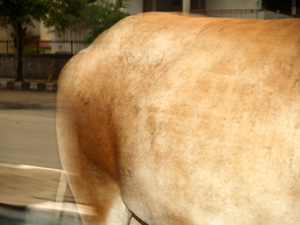 We only caught the tail-end of Cow B (above). As we passed this street cow I pointed at the window and shot at the head of the cow. But by the time the shutter clicked up and down, we had reached the business end.

Cow C posed very thoughtfully for me in the square of a local market, underneath a sign which, I’m told, is for a stock brokerage. Kismet!

5 Responses to Cows of the Street