Foghorns, Fierce Milk, How to Dismount a Camel

During our 3-week trip to India over X-mas, Pulao and I went with her family on a 1-week vacation touring the desert state of Rajasthan. We set out from Delhi at 7 AM and the roads were foggy. Extremely foggy. Like white sheets flapping in a cloud. Of milk. Bleached milk. White sheets floating in a cloud of bleached milk and marshmallows, all rolled up in the proverbial pea soup. But really white pea soup.

Our driver, Hari Singh, seemed unperturbed by the lack of visibility, and determined to pass all other vehicles on the road at high speeds. While my family slept peacefully, and Hari Singh hurtled through the fog, I alternated pressing my fingers through the fabric of the seat in front of me with counting dotted lines on the road before they were swallowed into the white abyss. One, two. Three?

Later, Hari performed an impressive maneuver involving 3 lanes of traffic, 2 semis, and a stray dog from the shallow end of the gene pool. With nothing more than skilled swerving and liberal horn-blowing, Hari Singh got us all through — fur and bumpers intact. It wasn’t a fair test, really, since the fog had mostly burned off at this point and he could see the obstacles on the road, but still I was impressed and became a devotee of sorts. After that, I was enough of a fan to take a nap in the car with only light sweating. 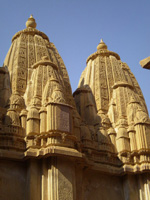 We arrived at our first destination, the town of Bikaner, that night, just in time for Camel Festival 2007. What can I say about a Camel Festival that you’re not already thinking? It was awesome. There was a beauty pageant where 15 girls were judged on a stage and 5 decorated camels paraded behind them and if any of the girls minded the juxtaposition, they didn’t say so.

I woke up at 3 the next morning with some severe intestinal difficulties and spent the next 24 hours shuffling from bed to bathroom and back again. I ate nothing for the duration. This is not a common occurrence, me skipping a meal. Missing 3? You know that’s serious shit.

What could it have been? My expansive eating habits left no way to tell. The chicken sausages? The small-town water? The cheese? The roadside mutton curry? Hari Singh suggested that it was the milk. “Rajasthani milk is strong milk,” he said. If the 5 drops of milk in my 3-ounce cup of tea did that to my stomach, then I must have missed something in the translation of Hari’s Hindi. Maybe, more accurately, he said fierce milk. Or ferocious milk. Extreme milk? Extremely ferocious milk. 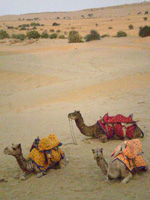 Day 3 – How to Dismount a Camel

We left Bikaner and my illness behind and drove to Jaisalmer. Jaisalmer was the best. We visited Sonar Quila, the Golden Fort — an 850-year old massive, living fort (people live there!) made of yellow sandstone. In fact, the whole city was made of yellow sandstone. And glowed magnificently in the setting sun. Later, we stepped inside a series of Jain temples with such delicate carvings on every surface that, to me, it rivaled the Taj Mahal for breathtaking-ness.

Topping off Jaisalmer was a camel ride through the desert sand dunes. There were 6 of us and 3 camels — one person per hump. Pulao and I rode together and it was amazing. The camels start off laying down in the sand. You climb on and they pop up rather rapidly. The dismount is a whole different story.

When it was time to get off the camel, the camel guide who was leading us started to give Pulao detailed instructions. I don’t really speak Bengali or Hindi. I know enough to get by, as far as my interests are concerned — words like, egg, chicken, fish, breakfast, sweets, lunch, rice, cauliflower, potato, etc. But none of that seemed to be helpful in the camel dismount instructions.

I sat nervously on the back hump. “What’s that? What’d he say?”

“Of course,” Pulao said. The guide was gesturing with his hands, like guiding an airplane in for a landing. From what I could tell, he wanted us to leap forward. Or swing our legs. “OK,” Pulao said.

“Translate, translate!” I said. The camel started shifting his weight around and snorting. “He said, ‘Lean back,'” Pulao said. I threw myself backwards. “Not you, me!” she said. I threw myself forward. The camel bent his front knees and we went down. We had arrived at the ground floor intact, just in time for a gorgeous sunset over the sand dunes.

6 Responses to Foghorns, Fierce Milk, How to Dismount a Camel