Some updates, for the Facebook and Twitter Nation; 12apostrophes was absent from the triple-w for approx. a few days, give or take many hours. For some of those days, I was in Vegas, so I didn’t care.

But, in the good news column, 12apos received four (count ’em, four) e-mails about the outage, along the lines of “Where is 12apostrophes?” and received zero e-mails of the “Good riddance!” variety.

1. 12apostrophes has at least four readers, not the before-thought of “two” or “a couple of” readers.
2. 100% of 12apostrophes readers respond favorably to the blog.

The site downage was caused by a roving band of crack Internet hackers trying to strike terror by crashing the world economic infrastructure and obscure blogs. Or else the hosting company “switched the name server” and then “forgot to switch it back,” should “propagate” in a “couple of hours,” but really “took a week.”

Meanwhile, back at the Vegas wedding, Pulao and I survived helicopter travel, although I had had my doubts. In fact, besides just avoiding the firey crash, the rides and views were a bit on the super-awesome side. Here’s what a small part of it looked like: 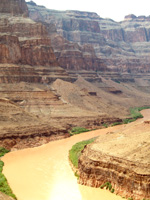 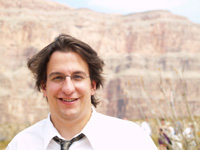 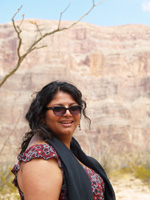 The highlights of the trip were the wedding ceremony at the Chapel of the Flowers, a classy oasis tucked away on a un-classy street, the Grand Canyon (from the air and the ground), friends and more friends, and craps at the Golden Nugget.

Another way to look at Sin City; friend and sometime-12apos commenter Crash Damag said that Vegas had moved way beyond capitalism, capitalism used to be you gave your money and got something, a good or service, and in Vegas you just give the money away, without that other part, where you get something.