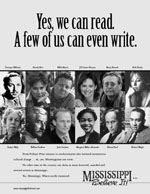 My sister sent me this link — MississippiBelieveIt.com — which has a series of posters like this one (see left) talking up the Magnolia state. The gist of the ads are, basically, that Mississippi has famous people (famous writers, famous actors and singers, famous football players), culture (the USA International Ballet Competition), and industry (space center that builds the shuttle, big Nissan automotive plant).

These posters, this Web site; it’s a gift from a Mississippi-based PR firm. They were sick of people assuming the worst about their home state.

It’s my home state, too (and one of my sister’s). And living in Minnesota now, I understand where that PR firm is coming from. I’ve found myself becoming something that I never was when I actually lived in Mississippi: an apologist.

I don’t have much of a Southern accent, or at least, I don’t sound like Cletus the Slack-Jawed Yokel from The Simpsons, and that tends to throw people off. “You’re from Mississippi?” One MN-acquaintance asked. “But you don’t have an accent. I don’t understand, were your parents . . . educated?”

People associate the South with a lack of education. Is that something to apologize for? Something to work to change, maybe. Mississippi recently was ranked in the bottom ten states (that’s out of 50, Mississippians) for public school-children’s writing scores.

But Mississippi is, by and large, a poor state (the median household income in 2003 was $10,000 short of the national average) — and access to quality education in the United States is, unfortunately, largely dependent on economic class. Is being poor something to apologize for? From what I’ve seen of both classes, not nearly as much as being rich.

I admit, as an English-major type, I’m particularly impressed by the writer poster (see above): Mississippi’s got mad authors. We’ve got the big guns, like Faulkner, and the money-makers, like Grisham, and the cult classics, like Eudora Welty. But does, let’s say, Pennsylvania have posters and a Web site? (Edgar Allen Poe, James Michener, and John Updike are all Pennsylvanians). Nope. Methinks the state of Mississippi protests too much. (But I haven’t heard a lot of pop culture anti-Pennsylvania sentiment in, either.)

So what’s there to apologize for, if not trends toward being less educated (or less wealthy)? The most weighty criticism of Mississippi I’ve encountered is a critique of culture, both said aloud (and joked) and implied — the criticism that Mississippi is the birthplace and radiating center of religious intolerance, the NRA, and racism.

Claims that Mississippians often go to church and like to hunt deer certainly won’t be taken as insults by all who hear them. Racism, however, is (or should be) universally considered the worst kind of criticism.

As I mentioned before, growing up in Mississippi, I never defended the South — I attacked it. But all the things that I myself disparaged the South for (I’m in favor of lots and lots of gun control, personally, and MS mostly isn’t) I’ve since found living in Minnesota.

My last job often took me to small towns in rural Minnesota, and I saw the same pick-up trucks, the same camouflage baseball caps, and the same gun-racks that I had found in Hattiesburg, Meridian, De Kalb . . . The great culture divide in the United States (if there can accurately be said to be one) is, I think, between city and country, urban and rural — not one drawn by the Mason-Dixon line.

I’m not trying to disparage my adopted northern home (Minneapolis, in culture and community, is truly one of America’s great cities, and I feel lucky to live here). Nor do I want to base too much on statistics (especially when many hate crimes go unreported).

But my point has to do with the perception of racism in the United States. As a friend who teaches at the University of Minnesota noted, a lot of students now think that racism was this thing that happened in the 1960s, and then Martin Luther King Jr. came along and “fixed” it. And as Pulao pointed out to me earlier today, if people in America (some much older than 18-year old college freshmen) don’t relegate racism to a time long gone, then they place it squarely in the South, and not in their own neighborhoods.

But I can write about Mississippi misconceptions and other Americans’ prejudices about my accent all I want, and although there may have only been 2 hate crimes in Mississippi in 2004, everybody knows there were a hell of a lot more in 1954 (or 1854, even). If you are from Mississippi, like me, then you’re always faced with something real, and horribly ugly: a long history of violent racism. A history that, maybe, should never be forgiven of a state.

But as Mississippi will always be where I’m from, I’ll continue to apologize anyway.