The Fine Wines of the Sick Rooster 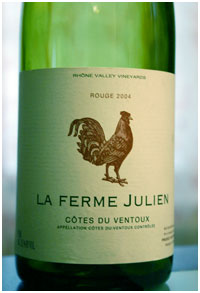 Trader Joe’s grocery store sells wines on the cheap. For the same price as a bottle of “Mad Dog” 20/20, or the dreaded Night Train Express, you can get wine made from real grapes, that won’t even make you go blind.

The most well-known is the Charles Shaw vineyard, called “two-buck-chuck” (or in Minneapolis, “three-buck-chuck,” since a bottle sells for $2.99 here). Chuck is actually made by Mr. Franzia, a California vintner-type person, well-known, at least to my college friends, as the man who brought us fine varietals like “Chillable Red,” sold by the box (the key to box-drinking, my friend Eric taught me, was, when you think it’s tapped, crack open the cardboard, take the silver-looking plastic skein out, and squeeze a whole nother 3/4 of a glass of goodness right into your mouth).

But Franzia’s two-buck-Chuck’s a winner. The 2005 Chardonnay took home the gold medal in the 2007 California State Fair Commercial Wine Competition. And better yet, Trader Joe’s in general has enabled, in every sense, Pulao, me, and many of our friends to afford to drink a lot of wine. Like a lot.

So 12apostrophes has a Wine on the cheap page now, with a snazzy logo, where folks will post reviews of wine, on the cheap, using very few French words, and misunderstanding those that we do.

For years, I drank whites like Pinot Grigios and Sauvignon Blancs, tried my best to rehydrate my mouth afterwards, and thought I didn’t really like white wine. But for six bucks, La Ferme Julien’s white blend is light, fruity, not dry (what’s the opposite of dry in oenophile-speak? fruity? wet?), and not-too-sweet. If I was to get poetical about it, I’d say bright. It’s a bright, refreshing wine.

It’s a blend of Bourboulenc, Grenache Blanc, Ugni Blanc, and Roussanne grapes. Separately, I never heard of them. Together, they make a beautiful wine.

We’ve enjoyed Le Ferme Julien equally well at a summer picnic with cous cous and pasta salad; watching a movie at home with a supreme pizza; and at a party where La Ferme Julien was a nice change after some heavy reds.

The first time we drank it, some of our friends saw the rooster on the bottle, consulted their shaky knowledge of French, and decided La Ferme Julien probably meant “the sick chicken.” I can see it; “la ferme,” like infirmary, infirm. And then there was that chicken on the bottle . . . But it really means “Julien’s Farm.”

If I ever see a bottle called Le Poulet Malade, I’m buying the hell out of it.

5 Responses to The Fine Wines of the Sick Rooster