My friend Ali died two days ago in a hit and run in South Extension, New Delhi. It’s probably not quite right to say “my friend” the way I just did, because I hadn’t talked to him in many years, not counting fleeting Facebook interactions. He was a wonderful person, and had many people as his more current and better friends, who will probably shake their heads in disappointment at the way I’m claiming a piece of him. But, even before this week, it would have been wrong to say “former friend,” which would have suggested a falling out. There was nothing of the sort.

The last time I really saw him was eleven years ago, when he showed up with a few other people from school at my wedding in New Delhi, five plus years after we’d all passed our twelfth standard boards. I was not expecting any of them, and was thrilled that they were there. I hadn’t thought to invite anyone to my wedding from our school days except a very close few, not because I didn’t want to see them, which I desperately wanted to, but because I didn’t want them to see me—I had gained a lot of weight since I’d left Delhi, and I thought people might make fun of me the way they had been teasing me about my increasingly American accent. (Ali, did, by the way, make fun of my accent at my wedding. I think there’s video footage of it somewhere.) More importantly, I thought for sure they wouldn’t want to see me, that they would think it laughable that I would expect them to put on good clothes and spend a nice December evening at my ceremony.

Why I’ve seen so little of my school friends in the last few years is why I never got back in touch with Ali, though I thought of him every time I went back to Delhi. “I hear he’s doing so well,” I thought, “he has newer friends,” or, “He’s in law school, he must be really busy.” So I decided that I had exaggerated the friendship we’d had in school, that nostalgia had emphasized what must have been trivial moments for him. But, here’s the thing, I’m spending some time remembering now, and we really were friends. 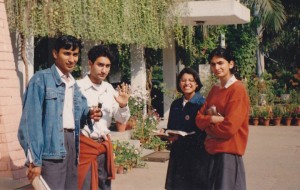 We sat together for two years during Political Science. Meenakshi Tandon ma’am scolded us for talking during her class, which we did for the entire time. Even though he was an obvious favorite of hers, it irked her that I didn’t realize that Ali might be able to talk through class and still do brilliantly in the exams, but I didn’t have his brains. My notebooks ended up being mainly blank sheets, with a phrase here and one there, with enough space between them as I thought was appropriate for her lecture, which I had not been listening to. I relied heavily on Ali and Neerja during test- and exam time to fill those blanks in.

I’ve been trying to remember what it is that Ali and I talked about during those classes, or, later, when he was over at my house and we talked for hours, and I barely noticed that the electricity had been out almost the entire time, but I can’t. I think it must have been politics, or religion, or the teasing that was his way. I remember him and I taking the DTC buses home after school, me taking the lead because I went that way every day. I crossed under the flyover at Moolchand, and realized Ali was still on the other side. I laughed when he caught up with me, but he was miffed. “Maharani,” he said, “You can’t just cross anywhere. You don’t actually own the roads.” I could only think to roll my eyes.

I know Ali was my friend because he said as much to me in what must have been one of our last real conversations, just him and me. We had spent some time with friends at Connaught Place, I imagine this was during a trip home a few years before my wedding, and were sharing an auto home. We laughed and talked nonstop for the hour-long ride, and when the auto pulled up to my house and I was getting out, Ali said that obviously we didn’t need to spend too much energy staying in touch because whenever we saw each other, it was like no time had passed.

Now that Ali is gone, I wish he hadn’t said it, even though that’s what I long to hear from all my friends. I took what he told me as permission to be neglectful, to not call him, and let enough time go by that I began to doubt that we had been friends in the first place. That doubt kept me from calling him when I was in Delhi over the years. It’s what kept me from reaching out when sometime ago he posted on Facebook two lines of a Byron poem that is such a favorite of mine that I have tried to find one excuse or another to teach it over the last ten years. (“She walks in beauty like the night/of starry skies and cloudless climes/”.) And though the waning frequency of our conversations over the years was, no doubt, worse for me, maybe he would have liked to know that I thought about him fondly over the years.