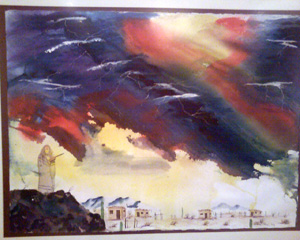 The colors don’t come through as well as I’d like from a cell-phone pic, but, in person, I was blown away.

Can you see the hair-thin lightning bolts?

I was in Phoenix last week at a conference in a resort, and I saw the painting you see here hanging on the wall. It was a ritzy place in the middle of the desert, on Gila River Indian Community land, where members of the Pima and Maricopa tribes live. So the decor and design was Native American, including murals on the ceiling of the lobby, and art on the walls of the rooms.

Maybe the most striking feature of the resort was a two-and-a-half mile “replica” of the Gila River. Why a fake river? Because the Gila doesn’t flow through the Gila River Indian Community anymore.

European settlers first started diverting the Gila River upstream from the Pima and Maricopa settlements in the 18th century. By the time Arizona became a state in the Union, the Arizona state constitution was drafted to uphold all existing appropriations and diversions, leaving a trickle, if anything, for the Gila River Indian Community.

If anybody’s heard of anybody from the Pima tribe, it’s probably Ira Hayes. Ira was a decorated American soldier in WWII, and one of the four men who raised the flag at Iwo Jima, immortalized in the famous photograph (and in Clint Eastwood’s recent films).

Then Ira, after his death, was himself immortalized in a song sung famously by Jonny Cash: The Ballad of Ira Hayes. The song tells the story of the Pima fighting for their water rights, Ira volunteering for the army, and, finally, Ira dying drunk, drowning in a ditch, forgotten by all.

The song is, to say the least, pretty sad. But it’s always been one of my favorites. And one of the first songs I heard that told a story with a point, and stood up for the little guy, in the true American folk tradition.

But there’s good news, believe it or not, and in the stories of the American government’s interactions with Native Americans, there’s not a lot of good news.

After three hundred years of being screwed out of their water, after the drying-up of an agricultural way of life, and after thirty years of litigation, the Gila River Indian Community is getting the Gila River back in their community, in a landmark settlement that went all the way to the U.S. Senate (and signed by President Bush!) in December 2004. 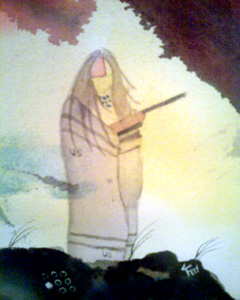 Others involved in Native American water disputes (and there are others) are hopeful for the precedent, and I’m hopeful, too.

Finally, this is an inset from Toby Manuel’s painting above, Thunder & Lightning I, and it was this image that most caught my eye. A figure, standing on a hilltop, protecting the village below, a shotgun half shrouded in a U.S. Army blanket.

Is it Ira Hayes? I think it is.

(Or it could also be a gesture towards the “smallpox army blankets”–one of the earliest documented attempts at biological warfare, where, in 1763, the British commander of Fort Pitt, Pennsylvania gifted two blankets and a handkerchief from a smallpox quarantine to Delaware Indian emissaries . . . But I think it is, at least in part, a tribute to Ira Hayes.)