What I Learned From My Dad 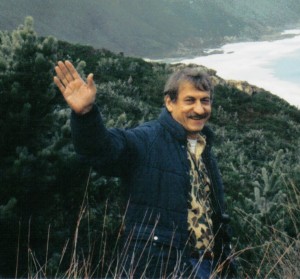 My dad died of cancer in February. He was 75. Since then I’ve been thinking about him a lot, and what I learned from him.

My wife Pulao and I each take out a small amount of cash every week just to spend on ourselves. My mother-in-law once asked me: “What do you spend yours on?”

“Drinks maybe,” I said. “Shooting pool, going to a casino.”

I learned all my bad things from Dad. He taught me how to shoot pool, first at Uncle Tom and Aunt Shirley’s house, and later at pool halls around Mobile, AL, where we lived.

He taught me how to shoot a gun, killing tin cans, and later squirrels and copperhead snakes, with a little .22 rifle.

He taught me how to play poker and blackjack, at home with pennies, and, when I turned 21, he took me to the Grand Casino in Gulfport, MS and sponsored me — 50 bucks — at the blackjack table. If I lost it all, that was fine. But anything I won over the original 50 I could keep.

He taught me this, I think, because these were the things that he had trouble with. Most gamblers do. And I had trouble with it too. We had a good time, even though we both lost, but after he left I went back in, rationalizing that I hadn’t lost any of my own money yet. Until I did.

There are things he never taught me directly, but I learned them from him anyway, or he passed them down in his genes.

I like to stay up way too late, just like he did, especially if there’s good conversation, good snacks, or good whiskey involved.

I learned some of my dress sense from Dad, which people point out when I wear shorts with a button-down shirt, brown loafers, and black socks pulled up high.

My idea of what “on time” means is different from most people’s, but pretty much the same as Dad’s.

You could tell this because he was always talking to strangers. He’d strike up a conversation with just anybody, and it always embarrassed me as a kid, but now I wish more than anything that I could be as easy around people as he was.

When I was 14, my dad was working in Perth, Austrailia, and I spent a part of a summer over there with him.

We went to a goldmine in the outback; we hiked up some mountains on the south coast; and we went to a crocodile park. I had just gotten my first camera, and I took pictures with enthusiasm that only a kid could muster. In that month with him in Austrailia, I took close to 1,000 shots.

This was back in the days of film. Which means that my Dad bought and developed 40 rolls of film. I took way too many pictures of clouds, and Dad teased me about it for years. But he kept me stocked up with as much film as anybody could possibly want, because he could see how much I loved to take pictures.

When we were in Australia, we drove past a sign in the middle of nowhere, some chipped paint on a rusted piece of corrugated tin. It said “Two-Up Betting Shack.”

He didn’t know what “Two-Up” was, but he wanted to check it out.

The shack was really a shack, and it looked pretty shady. I was imagining headlines in the next day’s paper like “Tourist Father and Son Dead in Two-Up Slaying,” but Dad wasn’t worried, and we walked in, and we watched some people we didn’t know play a game we didn’t understand. Dad struck up a conversation with somebody standing around, until he understood the game, and made a friend for the day.

He believed that people would generally be kind, anywhere you were, and you could understand them if you just talked to them. And maybe because he was right, or because he believed it, it was always true wherever he went.