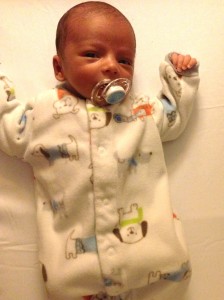 As a very-new father (my son Kunal, pictured here, is two weeks old), I’ve decided to adopt different parenting styles depending on the time of day.

If the sun is shining (and I wasn’t awake to see it rise), I change Kunal’s diaper with a silly song I just made up. When he cries, I say “Ohhhhh nonononono,” and give him little kisses on his forehead. I talk to him with a lot of baby talk and smiles, and there is more singing, often for no real reason. It’s basically a low-budget episode of Teletubbies.

As day turns to night, and night turns to the wee hours of morning, there is less baby talk. When Kunal cries, I ask him straight up: “What’s your deal, man?” There is very little singing. All-in-all things resemble a silent movie more than a kid’s show. A gulag-era Soviet silent movie, not a Chaplin flick.

At first I thought it was Kunal. Why, at 3:12 AM, does he lose some of his cuteness? How does he gain it back by morning?