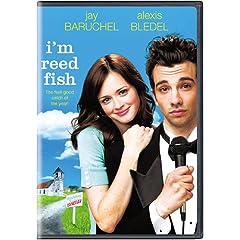 Pulao, Jayu, and I saw the worstest of worst movies at a friend’s house the other night. I saw the box at the movie store and picked it up of my own free will, even though the title was I’m Reed Fish, which should have told me all I needed to know. I saw the funny kid from the short-lived TV show Undeclared and the girl from Gilmore Girls, arm in arm, smiling up at me from the cover. They looked so happy, but it was all a lie.

The IMDB Plot Synopsis reads “This plot synopsis is empty” which turned out to be a scarily accurate description. You learn, after about a half hour, that the film you are watching is really a film within a film, directed and screened by the main character, Reed Fish, to an audience of characters in the film, some of which play themselves, and some of which are played by each other. Yeah.

There’s a “zorse,” which is a striped horse–half horse, half zebra–and the zorse really stole the show–although it was only onscreen for 24 seconds, he elicited a pleasant “huh,” and then a slight intake of breath that almost led to a chuckle, which was the emotional highlight of the film.

I’m Reed Fish is the recipient of two awards too many, by which I mean the U.S. Comedy Arts Festival Film Discovery Jury Award in two categories–Best Actor and Best Actor Award. So that’s one award too many. It also grossed 3,130 dollars too many, if you know what I mean. If what I mean is that it grossed $3,000, which is one of the greater scams of the century.

I’m Reed Fish proves Einstein’s special theory of relativity, which shows there’s no absolute measurement of time, but that time depends on an observer’s position, speed, and on the soulless quotient when measuring the delivery of inane dialogue, so that the 93-minute running time advertised on the box easily stretched to 6 or 7 hours in the space-time fabric of the couch where we sat.

Anybody seen any bad movies lately? Worst. Movie. Ever?