I’ve been hearing for a while that the latest in party-game crazes is Apples to Apples, and I’m happy to report that after a single night’s shennanigans, I can declare myself a big fan.

See, my two favorite games so far have been Taboo and Drinking Jenga and Apples to Apples provides a combination of both those games. (I feel legally obligated to tell you that drinking apparently isn’t really a requirement– but, like I’ve been telling my writing students for years, there are just some things you shouldn’t try without being drunk.) 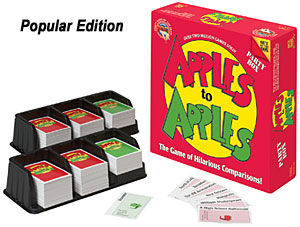 The premise of the game is fairly simple. There are two kinds of cards: green and red. Green cards have adjectives on them, and the red ones nouns. One person turns a green card over, and then the rest of the players pick a red card each from their hand that they feel best matches the adjective. If the judge, the person who flipped over the green card, agrees with your noun-adjective matching, then you win– which means that you get to keep the green card. Whoever gets to ten green cards first wins.

Wait, did I say simple? I meant painful to explain, but the game ends up being fun anyway.

The main thing is that Apples to Apples is a sly game– winning at it is sometimes about having an imaginative vocabulary, or being quick with pop-cultural references, and other times it really is about you making connections that are weird enough to get noticed, but popular enough to get you get picked a lot. (For example, I picked Thunder as the best noun for the adjective Cranky– but I couldn’t tell you why.) Then again, sometimes it’s about an affection for puns, and sometimes it’s about simple associations between concepts. Who knows? Not me, since I didn’t actually win.

What I do know is that a sure-fire way to make it fun is to play this game with five other loud, oustpoken people. Or, to be honest, with four loud, outspoken people and a petite, quiet woman. (Well, to be perfectly fair, with one petite and quiet woman, one outspoken stoned guy, two moderately enthusiastic people, one fairly enthusaistic player, and a partridge in a pear tree. Plus wine.)

Regardless, it’s an incredibly fun game, and I know that some reader/contributor of 12apostrophes recently got it as a birthday present so I’m waiting to get invited over, especially now that I hear you can buy a bible expansion pack.