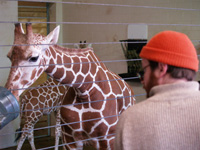 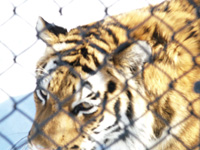 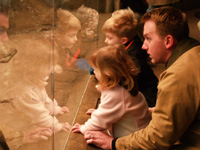 A friend of ours (we’ll call him “Coal” man, to protect the innocent) had to do his homework at the Como zoo in St. Paul Saturday morning, and he invited Pulao and me along.

He’s taking an “animal” class at the University of Minnesota, and the assignment was to observe people interacting with animals. First stop was the big cats enclosure, where the tiger was framed nicely behind chain-links, and traced his own pawprints in the snow, around and around his cage.

For some reason or the other, there were zoo workers with a tiger pelt (hope it was nobody he knew) for the children to pet. One little boy, who I honestly believe was mentally handicapped, quickly got to the crux of the matter.

“Did you shoot the tiger?” he asked the zoo personnel.

“Can we shoot the tiger?” he said.

“Then we’ll shoot the tiger?” the boy asked.

Later on the same boy talked to me about the seals at great length, and how each of the five seals named “Sparky” had died, and that’s when I formed my opinion that he wasn’t like other kids, or at least had an unhealthy youthful obsession with death.

At the time our academic friend gleefully wrote all this down and more. “This is good stuff,” he said, all his misanthropy confirmed.

We ended with the polar bears, and again, human kind came through for our friend’s assignment. Three kids were skimming snow off the ample heaps on the zoo grounds and throwing snowballs at one of the polar bears.

Only one kid had any aim worth a damn. One never got near the bear, and one, who must have been 3 years old, commited the cutest attempt at animal cruelty ever seen, forming a haphazard clump of snow and hurling it with all his might, only to have it poof into harmles powder about 4 centimeters from his own foot.

But one boy was able to hit the bear — twice! The bear in question was sitting and licking its back paw at the time, and it’s hard for me to imagine anything being less perturbed than this 1-ton bear was by the 2-ounce snowballs it took on the fur. He cocked his head slightly to the side where the ball landed on his other paw and took a quick taste, to see if outside snow was any better than cage snow, then resumed the paw-cleaning.

Finally, in the pics, I have high-life man with giraffe. Is there anything else to say? 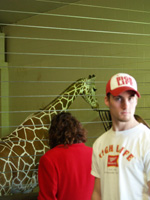 One Response to A zoo story