The Buttery Wine of the Zarafa Giraffe 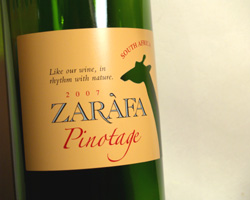 Pulao and I started to frequent Trader Joe’s last fall, and we’ve waited for the wine on the cheap God-send to stock a Pinotage ever since. This past Saturday we found it.

If you’ve never had a Pinotage, get to it! Two of our friends, dbay and Duodecad, introduced Pulao and I to the Pinotage varietal a year or so back. “This red wine tastes like butter,” they said. If that doesn’t sound good to you — well, that’s understandable. But it is. Good. And they do — most of the most pleasant bottles of Pinotage I’ve tasted had smoky, creamy tones in the nose and the finish.

Zarafa’s 2007 Pinotage has that buttery, smooth texture, as well as a ripe, delicious berry-ness. Not too acidic, but not too sweet. This was the first bottle I opened with some folk Saturday night (by the time a party gets to the third bottle or so, remembering how the wine tastes gets a little more . . . beside the point) and it was well-liked. The following bottles, even a decent Chianti stand-by from Trader Joe’s, tasted a lot more like $4 wine when they had to follow the blossoming flavors of the Pinotage.

As you might have guessed, Pinotage grapes are a hybrid of Pinot Noir and (as you almost certainly have not guessed) Cinsaut Noir (which used to be called Hermitage — hence the portmanteau name Pinot-tage). Just like my experience with Pinot Noir, when Pinotage is good it’s great, and when it’s bad it’s total swill.

So on that note, an important note: this review regards the Zarafa 2007 Pinotage. Do not buy the 2005. The Zarafa 2005 Pinotage, as any quick blog search will tell you, is apparently pure death.

I also read that many Piontages, which I haven’t noticed, reportedly taste of banana — I’ll have to buy another 2007 Zarafa or two and test out that theory immediately.

3 Responses to The Buttery Wine of the Zarafa Giraffe